Following the Nacra 15 Nationals and Australian Youth Championships in Hobart, my skipper moved out of the class and I was offered the opportunity to sail with Georgia Payne. This is a great opportunity the only downside was that she lives and trains in Mandurah south of Perth. We have been getting in as much training as we can, given the difficult commute from one side of the country to the other, but along with our coach Mikael Lundh, we have developed a great team. 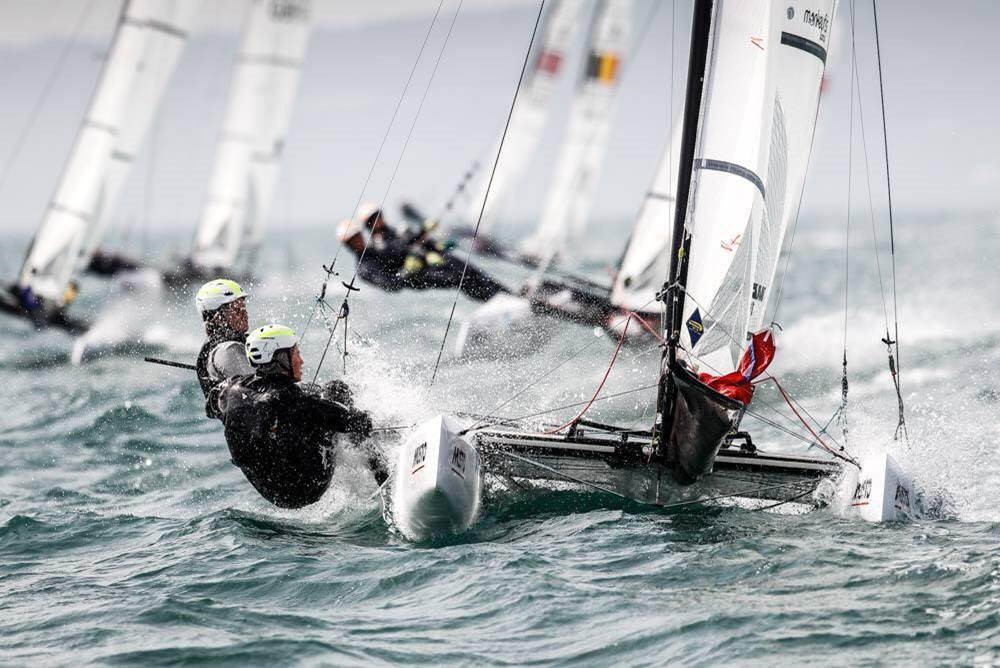 We headed over to the UK in early April to compete in our first regatta together – the RYA Youth National Championships which were being held at WPNSA, the Weymouth and Portland National Sailing Academy. We started the regatta with what looked to be a top 3 result but due to a little mix up with marks, we got a Retired along with the other Aussie team and our German training partners. Once we got that little hurdle out of the way, we started putting in a solid score card in the mixed conditions. An incident at the top mark with a 420 led to a capsize, helmet and boat damage, but worse was the 12th place we ended up with. That came back to hurt us at the end of the regatta, when we were in medal position on the last day but jumped the gun in the penultimate race and got a UFD. The committee said it was literally millimetres over, but over is over. At the end of the regatta, we were 4th overall, a result we were stoked with, but a bit sad about what could have been.

Did I say it was cold! It was very cold. Each time you got hit by a wave it took your breath away!

After this regatta and more hard training we were lucky enough to followed it up with another trip to Europe this time we took part in the in Holland, the Dutch Youth Regatta in Workum, Netherlands. Competing with my new skipper Georgia we took to the water in 17 races against a 42-strong fleet made up of the best youth Nacra teams from across 15 participating countries, where 4 of the nations competing used this as the qualifying regatta for the Youth Worlds position. After a tough few days of racing and continual focus on the challenges on the race course,  Georgia and I took out first place overall  to take the gold medal. Our victory included five first-place finishes, three seconds and a third, enough to fend off teams from Germany and France who finished just behind us. The Dutch Youth Regatta was so much fun and is one of the largest sailing events in Europe, and acts as event two of the Nacra 15 European Super Series. Their victory provides them with the perfect platform to launch into the Nacra 15 Open World Championships, where they will again compete in Marseille, France in October.

We have a full schedule of training throughout the rest of the year competing in these international regattas when we can so that when the Nationals and Youths in Melbourne start at the start of 2020 we are ready with everything we have learnt over the year to do our best and hopefully grab the World Youths spot. Thank you so much for supporting us, helping and encouraging us to get out on the water and do our best!

Renowned international yachtsman and regatta official Iain Murray will once again take the reins as the independent Regatta Director for the 36th America’s Cup presented by Prada, the Prada Cup...

Rough ride to the CupAmidst a sea of uncertainty, the Royal New Zealand Yacht Squadron says preparations are still on track for the 36th America’s Cup.Written by Jack O'Rourke, Ocean...

Fast across the Tasman... twice

Two dramatic and tantalising new ocean (and we mean ‘ocean’) race courses are being shoe-horned into a busy America’s Cup summerWith the 36th America’s Cup as the centrepiece, the summer...

America’s Cup is heading to the RPAYC

The Royal Prince Alfred Yacht Club (RPAYC) is pleased to announce the famous ‘Auld Mug’, the America’s Cup, is headed across the Tasman Sea to the Club in March for...

Meltemi in the Lagoon at Lord Howe Island dwarfed by Mt GowerIn late 2009 I had been for some time contemplating taking my nearly 3 year old catamaran, a Seawind...

Boatyard Summer Bookings, Work Berths & Tenant ServicesThe Club wishes to advise our members that your Boatyard is extremely busy and is currently booked out until mid November. If you...

The RPAYC will be represented at this year’s SheSails Open Regatta hosted by Newcastle Cruising Yacht Club and scheduled for November 28-29, by Nicole Butcher, Lisa Ratcliff and Lauren Crossman.Competitors...

Dear Members,I hope that you are all well.Thank you everyone for your patience over the last few months while construction has been occurring at the Club.You will be happy to...

The Club wishes to notify Members of maintenance and re-line marking that will take place, weather permitting, within the middle car park, top car park and Crystal Bay Hardstand. Middle &...

This week marks 20 years since the Opening Ceremony of the Sydney 2000 Olympic Games.RPAYC had a large representation of members who gave their time on the water both inshore &...

Only 6 weeks to go until the 2020-21 Women's Twilight! Racing kicks off on Tuesday 27th October and finishes Tuesday 16th March 2021, held fortnightly with only 1 male allowed...

Harken are proudly supporting the Centreboard 2020-2021 Summer Centreboard Season with kitting out all competitors with a Club Team Shirt & race vest.Please submit your order below by September 27.  ORDER...