There’s a distinctive swagger amid the Australian Farr 40 class. Four top ten finishes at the recent international title, a new batch of super keen owners for the 2014-15 season and preparations underway to host the Rolex Farr 40 World Championship in 2016 have injected vim and vigour into the enduring one design fleet.

Entries for next week’s Sail Sydney are closing in on the 300 mark and the decision to waive the late entry fee and final surge in registrations is pushing organisers of the annual sailing regatta hard to process the resulting paperwork.

The 2014 regatta is based at Woollahra Sailing Club at Rose Bay with the competition to play out on Sydney Harbour 2-7 December 2014, just one of the maritime events under Sydney’s Festival of Sails banner for the month of December. Olympic classes race Tuesday December 2to Thursday 4 and the youth and open classes from Friday 5 to Sunday 7.

The International Moth class is readying for its world championshipnext January at Sorrento Sailing Couta Boat Club in Victoria and the local Sydney fleet is taking advantage of the chance for valuable regatta practice in the run-up to the title.
Moth world champion from 2012 Josh McKnight, sailing for the Royal Prince Alfred Yacht Club, is gearing up to regatta mode after his last major competition, the Moth worlds at Hayling Island in the UK in July. “It’s good to race in a proper regatta setting. Sail Sydney is important for getting my regatta experience back up,” he says. McKnight maintained his fitness over the cooler months running in soft sand and swimming with the Bold & Beautiful swim squad at Manly Beach three times a week. 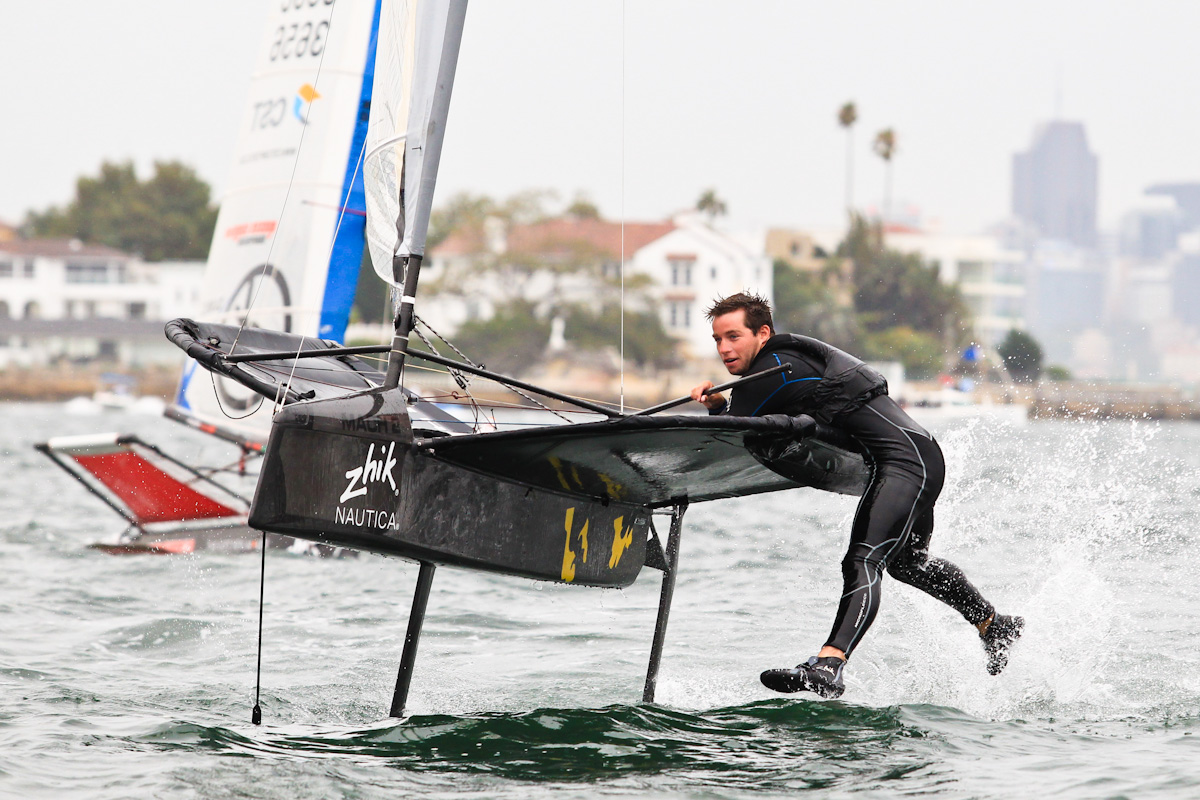 The 5 day event saw 13 teams from Australia, New Caledonia and New Zealand race in a round robin style of match racing competing for the Rockin’ Robin trophy in memory of 2 sailors, father and son who tragically lost their lives at sea on board Rockin’ Robin

The last flight of the round robin was completed this morning with a surprise upset by Emma May (CYCA) defeating the event leader George Anyon (RNZYS) in light and shifty conditions. Also Harry Price (CYCA) completed his round robin defeating Sam McKay (RPNYC) which has pushed Harry up to equal first position with the teams from New Zealand.

Today was a completely different day from yesterday, unsteady weather made it “extremely frustrating” to set the course, the constant wind shifts and stoppages made racing very slow, only completing 24 races as opposed to 52 on the first day.

The Kiwi teams are again on top of the leader board after day 2 of racing. Sam Mackay (RPNYC) and George Anyon (RNZYS) are sitting high and dry with 9 wins out of 11 races. George is still proceeding to impress the field by defeating the top 5 Seeded skippers.

Day 2 of racing was very "Frustrating"

The 22nd HARKEN International Youth Match Racing Regatta at RPAYC opened with a spectacular day of racing on Sydney’s Pittwater with over 100 Races completed in a lively15-18kt NE sea breeze. The field this year is not short on experience as although the skippers are all U21, they have already racked up 65 ISAF graded Match Race events between them. George Anyon and his team from RNZYS NZL punched well above their weight today and could be the dark horse of the Regatta. With 7 wins and 1 loss his scorecard for the day matchs that of the far more experienced Sam Mackay from RPNYC NZL. The host Club’s Clare Costanzo fared the best of the female skippers with  5 wins from 8 starts losing by the narrowest of margins to Anyon. Also off to a comfortable start was the CYCA’s Harry Price who won 6 from 7.