Two handed sailing has a strong pedigree and a big following in the northern hemisphere but with the notable exception of the Melbourne Osaka Race it hasn’t attracted sustained mainstream interest here.

Short-handed sailing represents a huge physical and mental challenge. You get virtually zero sleep and have to physically push the boat while balancing learning to work together as a team. All of which makes it complicated, but also extremely rewarding and it must be said, fun.

If any of that sounds interesting, as opposed to a nightmare, then there’s some good news as this year there is a big and some would argue long overdue expansion of short handed events on the sailing calendar.

There’s also the JPK Pacific Two-Handed Pointscore Series currently underway, with the third race of the series starting in Sydney on February 15 and running in conjunction with the Sydney to Newcastle race.

JPK Pacific is the Australian arm of the French boat manufacturer and is solidly backing the local development of two handed racing. JPKs have forged a formidable reputation in racing circles and seem to be the weapon of choice for a lot of the top crews due to their versatility and durability.

More than 60 boats lined-up in the 2019 Rolex Fastnet IRC Two Handed Division, everything from the class-leading JPKs to Swan 44s. French offshore legend and JPK founder Jean-Pierre Kelbert combined with another highly accomplished French sailor Alexis Loison, to scoop the honours, in a brand new JPK 10.30 Léon, which showed its pedigree in fast surfing conditions.

“The best time was just after the Fastnet (Rock)”, Losion recounted after race.

“We put up the little spinnaker. We had over 20 knots of boats speed many times and there was a lot of water on board. Although we were just two, we changed the sails together and talked strategy, we made a very nice team. Jean-Pierre is a great windsurfer so he was very good downwind to the finish, jumping from wave to wave.”

Losion knows a thing or two about short handed racing. In the 2013 Rolex Fastnet he and his father Pascal raced their JPK 10.10 Night and Day, to become the first double-handed crew ever to win not just their class, but the race outright, ahead of all the fully crewed boats. 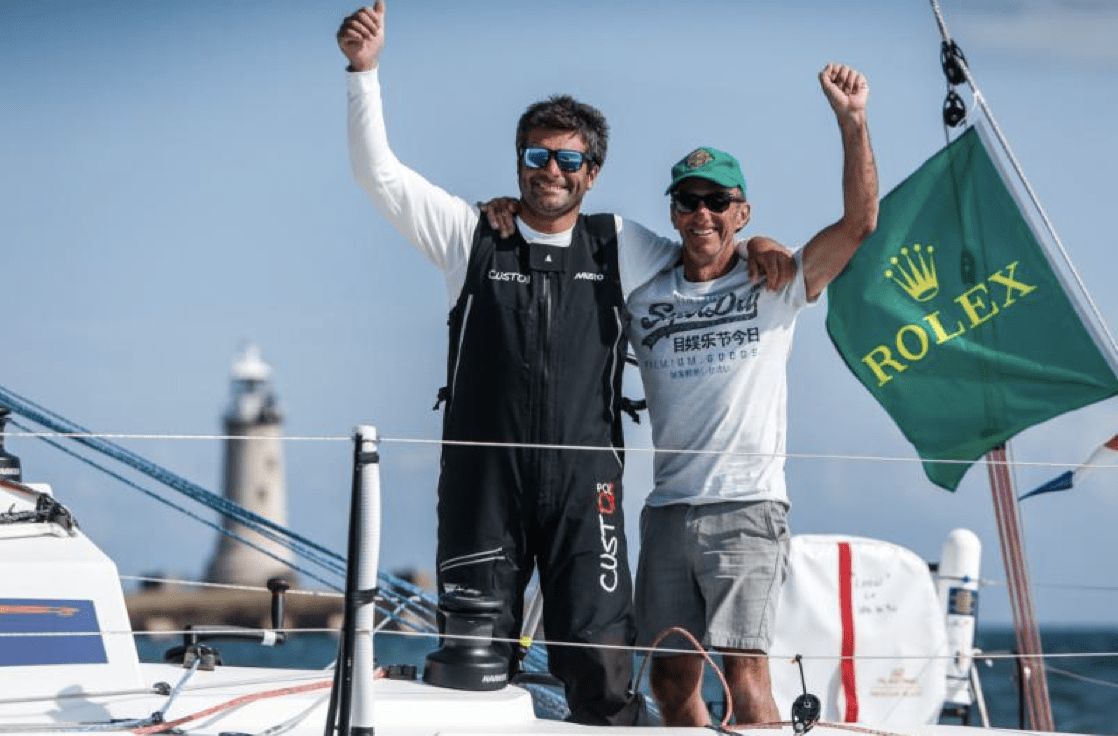 Short Handed Sailing credit: Paul WyethFor Loison, the main attraction is that there is never a dull moment. No sitting on the rail for hours at a time.

Setting up a boat for short handed racing is a big undertaking and to explain some of things any prospective competitor should keep in mind, JPK Pacific and North Sails will be hosting an information night on February 11 at the Royal Prince Alfred Yacht Club.

JPK Pacific Directors Paul Glynn and Mattijs Willenborg will be attending the session and have checked-out France’s booming two-handed circuit and are happy to share their knowledge and expertise.

Australia will also be fielding an entry in the Mixed Two Person Offshore Keelboat event at the Paris 2024 Olympics. Australian Sailing is collating a list of sailors who believe they have the mental and physical attributes to battle it out over a three to four-day offshore event. More on those driven individuals another time.

World Sailing have signalled that there will be 20 entries at the Offshore World Championships in Malta in October this year and if more than 20 country nominations are received then there will be a country qualification event in Europe in May/June.

So, if you are attracted by the challenges and benefits of two-handed sailing it’s time to start looking for a boat – and logging some offshore practice miles. That’s absolutely necessary given what’s acknowledged as the most difficult manoeuvre in two-handed sailing – gybing in big breeze downwind. Mastering that alone ensures you have garnered some very impressive and translatable skills.

Message from the Commodore

Do ALL your Sails meet the new Rules? - Changes to Sail Number Rules

At the 2019 World Sailing meetings their Racing Rules Committee approved changes to the rules relating to sail numbers. The changes introduce a requirement that numbers be of a contrasting...

Dear Members,With further restrictions that have been announced this week we would like to remind you that we are here to help.Last week we sent boat owners a message offering...

The Club would like to extend a warm welcome to SWS Pacific who have recently taken up a tenancy at the Club. The office is situated on the first floor (upper...

Available for collection Monday - Sunday: 09:00 - 16:00In an effort to assist our members we launched a new service at the Club during the week. Our NEW Alfred's Grab...

Special Member OfferPurchase the latest copy of Sails Magazine, Australasia's only print and digital yachting magazine and Ocean Media will donate $2 back to the RPAYC, supporting our Youth Competition Support...

Dear Members,A great deal has happened over the past week and like you, the Royal Prince Alfred Yacht Club has had to adapt to the ever-increasing demands and changes.As you...

We are excited to launch 'Alfred's Grab & Go', which is now open! Available for collection  Monday - Sunday: 10:00 - 16:00THE DETAILSDrive or walk via the ring roadPark adjacent A Arm, short...