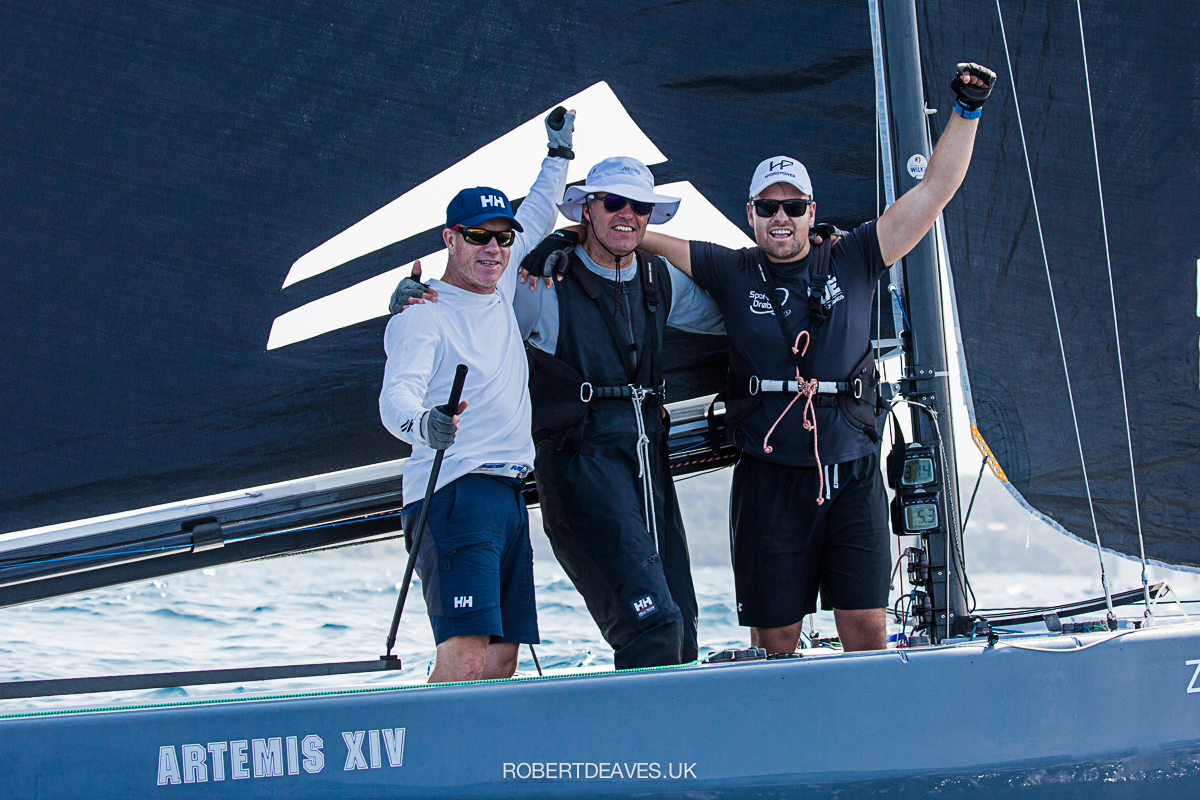 On a day in which everyone had their chances, and the left side kept on giving, the race wins went to Prettynama (GER 79, Max Müller, Mark Dangel, Wiebe de Witte) and John B (BAH 22, Gavin McKinney, Mathias Dahlman, Lars Horn Johannessen).

While the forecast was not far off, the day promised more than it delivered with clearing skies, rising temperatures and a north-easterly breeze. However in contrast to previous days the nor’eastlerly never rose above 8-10 knots and spent most of the day struggling to build to more than 6-7 knots. However it was a great day on the water, more so after Sunday’s cold and wet conditions and was a great end to a fabulous championship.

After being called on the course side in the first race of the day, Race 6, Ali Baba succeeded in returning and then being fastest to the top mark. Followed by Artemis XIV, they then followed the pressure out to the right, only to have the left come in strong. Leading the left pack were Prettynama, who then held onto the lead downwind to win the race by less than a boatlength from Ali Baba and Zicca (SUI 201, Tobias Isler, Rob Schrivenor, Will MacKenzie). Artemis XIV fared worse and ended up fifth across the line, which meant the championship would go down to the final race.

While most favoured the left again in Race 7, Ali Baba headed right after a bad start. Only Ali Baba could now beat Artemis XIV to the title, so they followed and kept close to the Bahamian team. When the fleet came back together they were both mid fleet. It looked like game over. Ali Baba showed exceptional speed to climb to fifth, but couldn’t get near to the leaders. John B led the race at every mark to score their first win of the championship while the others scrabbled for every point, as the podium places were extremely tight. Girls on Film (GBR 40, Peter Morton, Andrew Palfrey, Andrew Mills) looked to have the initial advantage and were second at the gate. However New Moon II initiated a tacking dual up the final beat and coming into the line there was nothing to separate the two boats. In a photo finish, New Moon II crossed just inches ahead of Girls on Film, enough to take the silver for the second year running, while fifth for Ali Baba was enough for the bronze, on equal points with New Moon II. 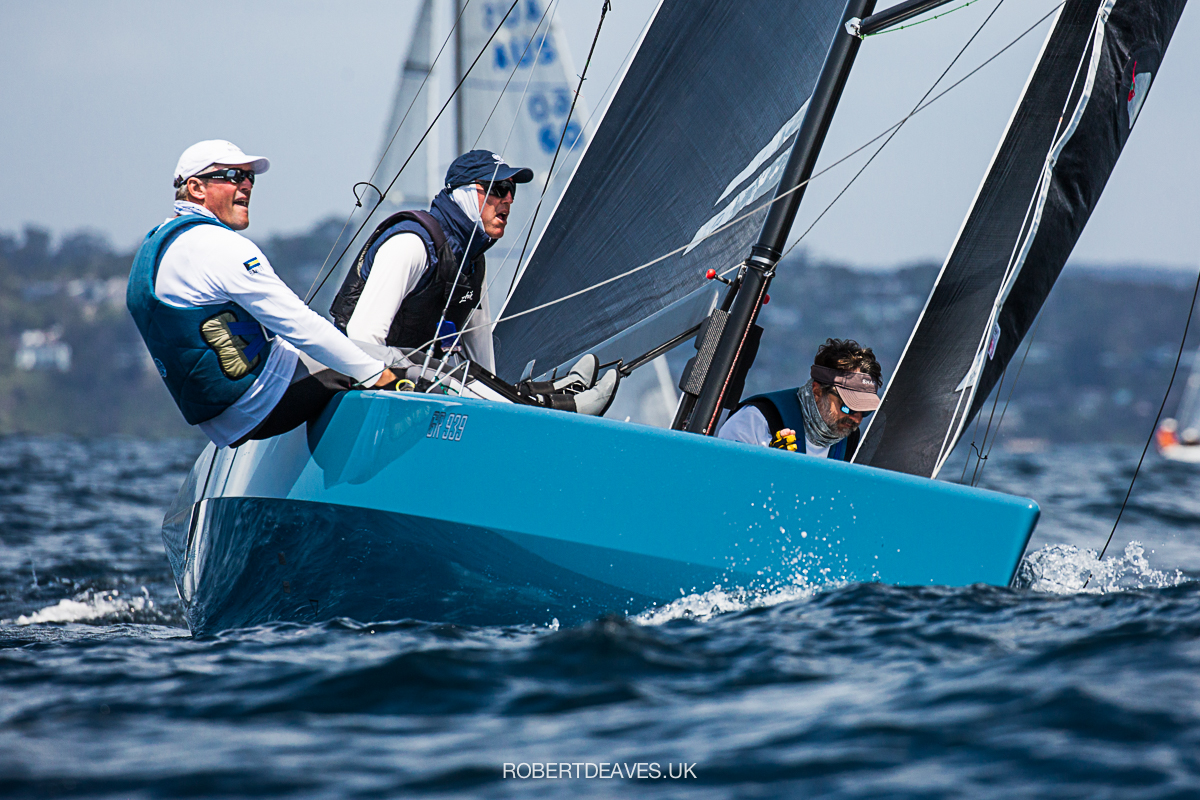 Peter Vlasov, from New Moon II said, “Very exciting. There were five boats that could make it onto the podium and so it went. Kristian knew that if he came fourth or less then that would seal the world championship for him. And then the battle really began during the end of race one today leading into Race 2, because it was all down to the wire. Whoever ended up ahead was going to win silver and bronze.”

“For us it was exciting because it was all tacking duals. Our fellow Bahamian, Gavin McKinney decided to declared World War Three which we promptly won, and then we got into this tacking dual at the very end, leading up to the finish with Morty (Girls on Film) and his cool crew and we are talking millimetres. We crossed the finish line ahead of Morty by maybe 10 cm. It was beautiful. We are very excited to have fought for this silver medal."

“I am happy to say that this was an awesome world championship. I don’t know what we are going to have to invent to come back to Sydney, very soon. Something very good.”

Will Alloway, from Ali Baba, said, “We had a good first race. We led round the top mark and then got a bit unfortunate on the second beat and finished second. We had two bad starts today, but good comebacks in both races.”

“On the last race we messed up the start again and hot the right and managed to catch the guys up downwind and had good racing. Our whole strategy was to go left just to get the pressure coming down the course, but we were forced to tack out right and slowly work our way back to the left. The guys did a great job getting the boat going.”

“I got involved with Craig through Flavio [Marazzi]. I sail with Flavio on the GT32, the hydro-foiling cat. Then I did the Alpen Cup on Garda and enjoyed that and decided to do the worlds out here. It’s been a great couple of weeks, training before the worlds as well.”

It is his first year in 5.5s, and the second event. “I am really enjoying sailing them. The boats are super tweaky. The moderns are very similar in boatspeed, so almost a one-design class. But it’s really nice sailing them with a bit of development mixed in, providing very exciting and fun racing.”

For Kristian Nergaard, this win is his tenth world title, but nerves still played a part.

“Of course we were nervous going into the last race. We are not that strong in the light airs and with the lumpy stiff and we had to protect, but fortunately we had a third as our throw out going into today and that was important for us.”

“In the first race we were more concerned about New Moon II, they were closer to us, but we were with them and then we were on the right side, which was wrong. So we got a fifth in that race, and that was OK, so what it came down to in the end before the last if Ali Baba had won the last and we were fifth or worse, he would have won. So we just wanted to be around him at the start and we both got a bad start. We were second row. So we stayed with him and stayed close to him.”

He paid tribute to his crew. “Johan has been sailing for so many years, Solings, Olympics, and very experienced, so just a great crew to have. And Anders, with his experience now, in the Finn and going to the Olympics in a few months, was also great to have on the boat. He had to learn of course as he had not done that much, but he came round nicely and was a good part of the team.” 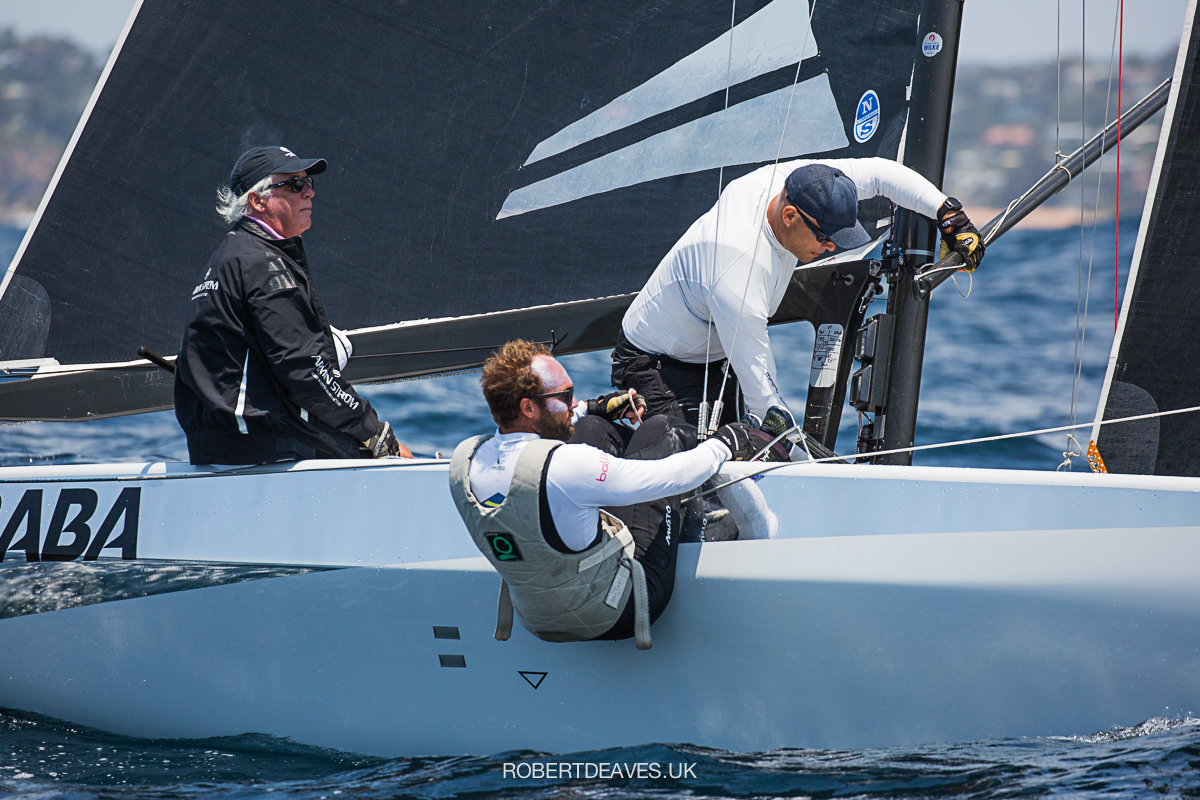 About the organisation over the last two weeks, “I was here in 1991 and sailed with my father and Australia has always been a nice place to come back to. It is beautiful, nice weather and nice challenging conditions. It was windy in the beginning and we liked that and when it was light and lumpy it was more challenging for us, but generally we got all types of conditions that you would need at a world championship. I must say to the organisers with the PRO, that it was a very professional team. I haven’t really seen that in a long time. So they held a really nice regatta and everything has been done and well organised at the yacht club and its just been very nice. I think the Australians really did a good job.”

“I’ve been with the class for some time, but right now I see that there is more guys coming into the class, there are more boats being built and there is quite a bit of interest and I think that there are going to get more than 20 moderns at future world championships, so that is good. It’s definitely at a  good place right now and I think we will see a lot of good sailors coming into the class and lot of interest in the class..”

In the whole 76-year history of the 5.5 Metre, only one skipper has ever won back to back titles in both the Scandinavian Gold Cup and the world championship – Kristian Neergard. Now he has repeated that feat and a word of warning for those looking to take over his mantle – next year’s events will be at his home club in Hankø, Norway.

All results can be found here: https://www.rpayc.com.au/results/2020/events/index.htm 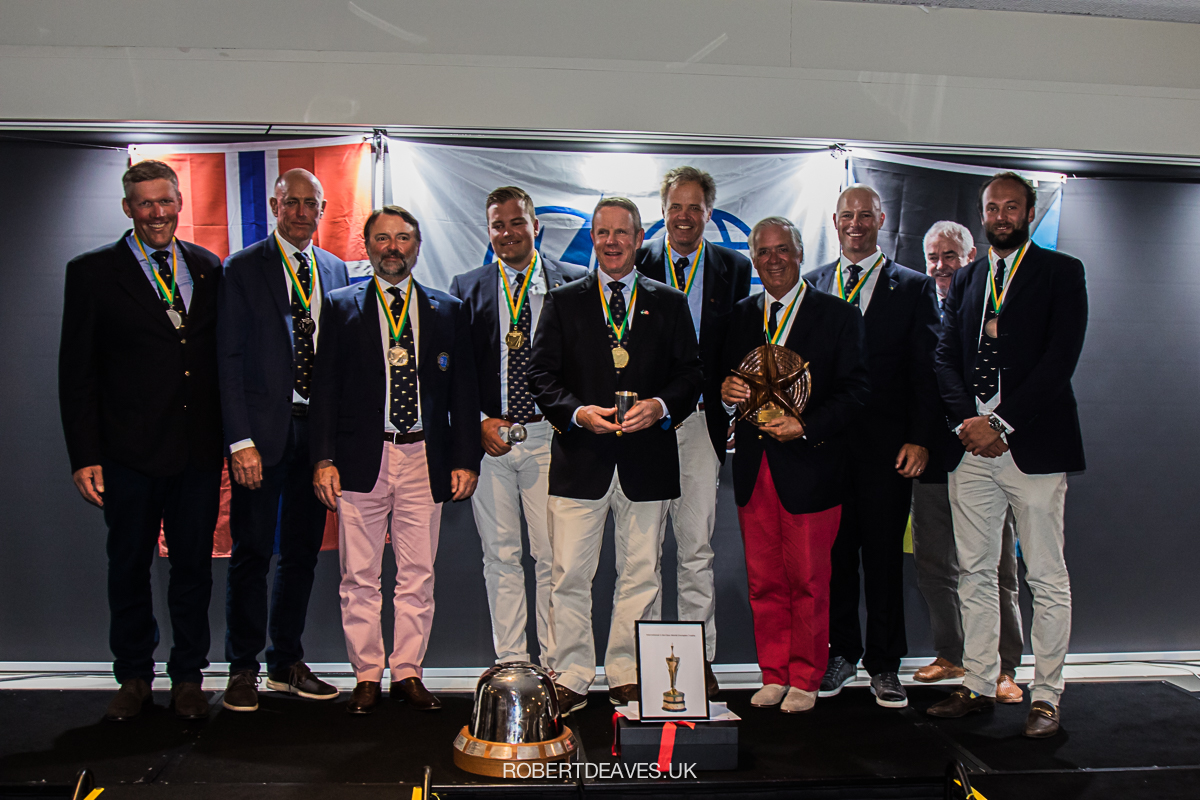