The new club Windsurfer LTs were launched on Friday 18th October with a round of short sprint racing to the north of Bayview. Following a quick briefing and welcome to our visitors from Palm Beach Sailing Club we heading out for the first race. A few extra competitors were then pressganged into joining in when they showed a bit of curiosity on the Centreboard Lawn so a fleet of 15 boards set out for the first start. 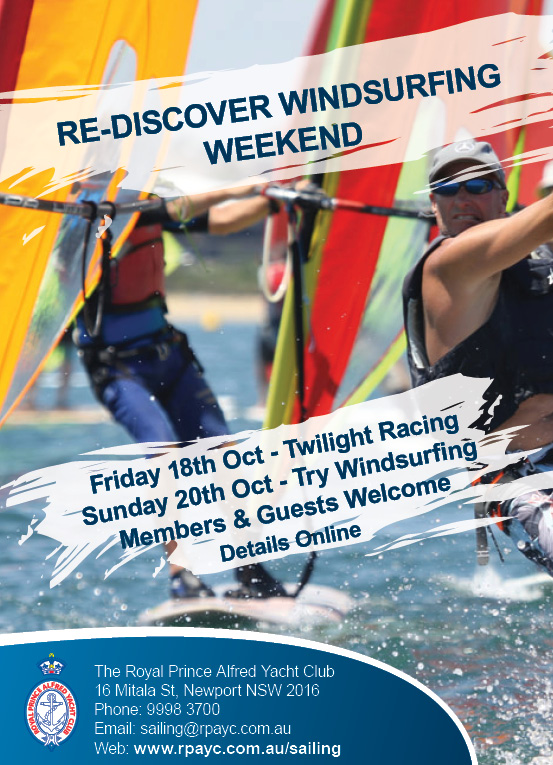 Race1 got away at 1730hrs with a fair amount of wobbling about at the start but with as the cobs webs were blown away a very close race ensued. It was clear from the early on that Steve Newman and Scotty O’Connor were going to be tough to beat having spent a bit more time on the boards and racing than the majority of the fleet. However following them home were Beau White, 3rd and Traks Gordon, 4th both as impressed with not having fallen off as with the great result.

Race 2 proved trickier at the start, the fleet rapidly bunched up at the favoured pin end. Some early starters struggled to get back but eventually cleared the line. The fleet rapidly split between the left and right of the course and when they came back together the righthand side had paid significantly with Jono Tuite leading round the top mark.

Jono lead at the gate but the efficient downwind pumping techniques of Steve, Scotty and Dan Wilson had seen significantly close the gap. Dan then slipped away passed upwind and led to the finish followed by Steve, a very happy Jono in 3rd and Scotty 4th. Traks had a respectable 5th with Heath Walters slipping through in 6th and Kerry Shimeld in 7th.

Race 3, with the pin still favoured saw another bunched start with plenty of dodgy tactics, sketchy manoeuvres and even a few entanglements. Once away the right was slightly favoured. Steve Newman resumed his favourite spot at the front with Scotty working through to second at the top mark and they stayed that way to the finish. Beau narrowly scraped a third, Nick, having swapped off the committee boat with Tommy 4th and Traks 5th.

Presentation was held on the Terrace outside Halyards over a few beers.